An E-Cigarette with Your Meal? 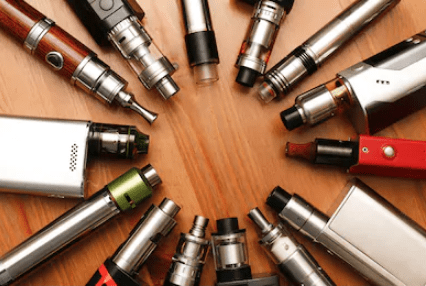 Regular cigarettes have long disappeared from inside restaurants. The days of having coffee and cigarettes or a smoke at the bar while staring over a scotch are memories of the past. With the rise of the e-cigarette, however, the issue of smoking at eating establishments has reared its ugly head again.

Cigarettes were removed mainly for health reasons: second hand (and often overlooked third hand) smoking being the concern. E-cigarettes get around this because they don’t emit smoke, only steam. So why are some of NYC’s top chefs and restaurateurs up in arms over e-cigs? Mainly because they look ‘tacky.’

That’s actually just one of the reasons, although it’s one shared by many. For instance, Eric Ripert—chef and co-owner of Le Bernadin in NYC—objects to them simply because of their appearance. He finds it unfashionable and weird to see patrons sucking on a plastic stick while dining. Justin Warner, another chef, dislikes them for the same reason. In a humorous remark, he disliked them because “they look like a prop I would’ve had in my raver days.”

It’s kind of true. The blue glow on the end of many e-cigs is very distracting and just plain odd, for lack of a better word. Many chefs and owners have problems beyond its appearance. Despite what advertisers say, there is an odor to e-cigs. However, advertisers do say that they don’t have an “offensive odor,” and the smell of an e-cigarette is substantially better than a real one.

Others, like restaurant spokeswoman Sue Chan and owner Gabriel Stulman, don’t like them because they find them disruptive to other customers. They see them as intrusive and “forcing their desires and interests on others in a manner with which the other party may not enjoy it.” This may be a little strong, but they are at the very least a bit distracting. Whether this is a viable reason to ban their use is questionable.

Sue Chan, who handles PR for Momofuku, says they kindly ask customers to refrain from e-cig use because it’s disruptive. Based on their seating arrangements, this seems a reasonable request.

The legality of e-cigarette use in restaurants has not been tackled yet. In the end, however, it is really up to the owner to decide if patrons can light up, or “glow up” (I’m not sure what the equivalent e-cig term would be). There are a number of chefs and owners who allow their use. Others like Drew Nieporent, who owns the Myriad Restaurant Group, sees the issue as dependent on the situation. For now this might be the wisest approach to it.

The future of the e-cigarette in restaurants—or indoors in general—remains uncertain. For now it seems like chefs and owners will deal with it on a case by case basis. In a city like New York City, a place where soda was banned, there’s a very good chance there’ll be some sort of legislation coming very soon.