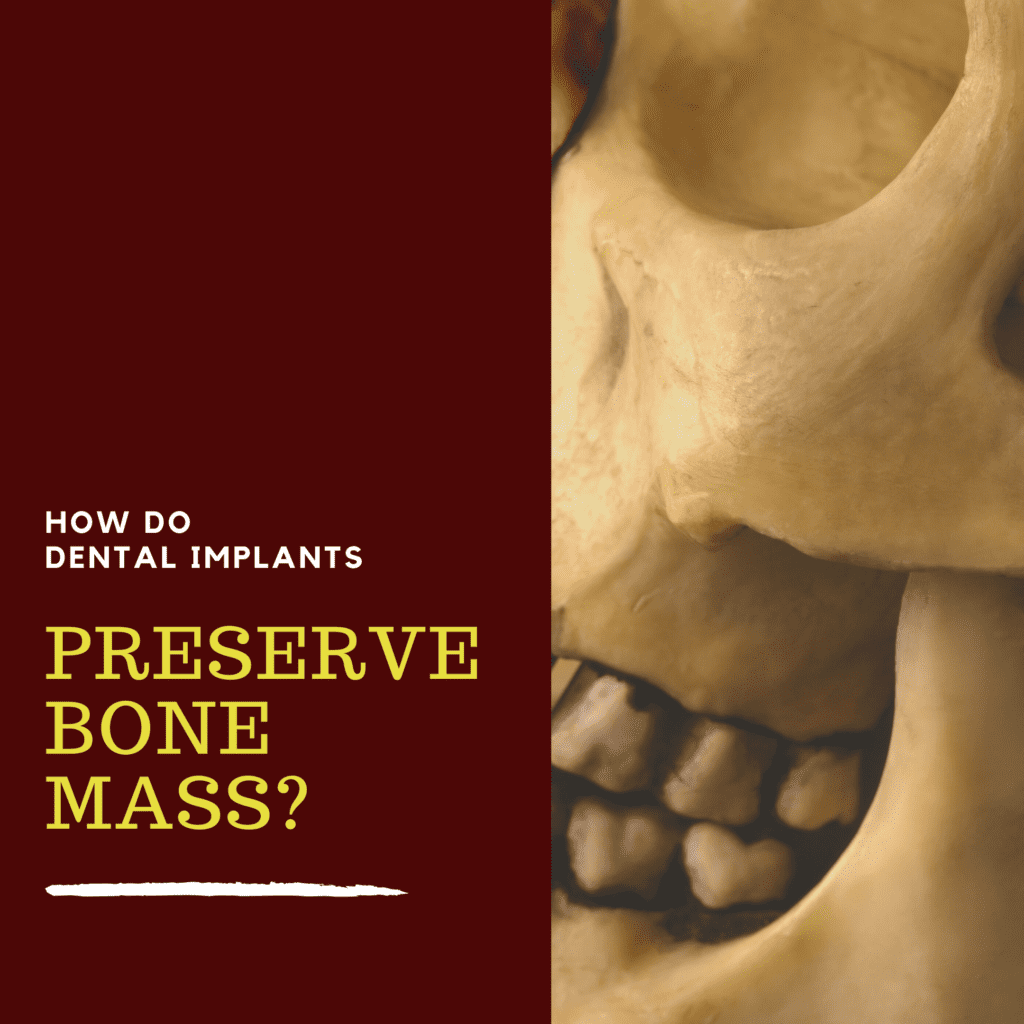 Cosmetic dentistry offers different options when it comes to replacing one or more missing teeth. While all these options can maintain the look of a complete smile after losing one or more teeth, only dental implants can offer functionality that most resembles natural teeth. In fact, one of the most important functions that dental implants perform is their ability to preserve bone mass in the jaw.

To understand why this is, let’s first take a look at the other two most common tooth replacement options. The first is a traditional bridge, which is composed of two dental crowns placed over the remaining teeth on either side of the gap, as well as one or more fake teeth in between. Like the name suggests, a dental bridge “bridges” the space created by one or more missing teeth. Another common tooth replacement option are dentures, which are a set of fake teeth with an acrylic base that sits on top of the gums.

In case you haven’t noticed, both traditional bridges and dentures are both used above the gum line. That is, they are superficial restoration methods that primarily restore the visual look of your smile. Dental implants, on the other hand, are placed into the jawbone where they will fuse with the surrounding bone and become strong enough to support a dental prosthetic. Since they are implanted in the jawbone, this also makes dental implants extremely strong, long lasting, and highly aesthetic.

In fact, acting as artificial tooth roots is the key to why dental implants can preserve bone mass. Consider a natural tooth composed of a crown and a root. When you bite or chew foods, a force is passed through the crown down into the roots. The jawbone then absorbs this force from the tooth roots. Essentially this force communicates to the body that a certain amount of bone mass must remain in the jaw to counteract the force of biting and chewing.

When a tooth is lost, the jawbone no longer receives stimulation from the force of biting and chewing. This communicates to the body that a certain amount of bone mass is no longer needed and begins a process known as bone resorption where bone cells are taken from the jaw and distributed to other locations in the body. Bone resorption usually occurs around six months after losing a tooth and will continue, eventually changing the facial structure and possibly causing more teeth to be lost.

Since dental implants act as artificial tooth roots, however, they prevent this process from starting by continuing to stimulate the jawbone with the force of biting and chewing. If bone resorption never starts, or if it is not continued, then the jawbone will continue to be healthy and strong. By being the only tooth replacement option that is placed into the jawbone, dental implants are the only tooth replacement option that is able to not only restore the look and function of your smile, but can preserve the health and structure of your jawbone as well.