Women: How Your Hormones Can Affect Your Oral Health 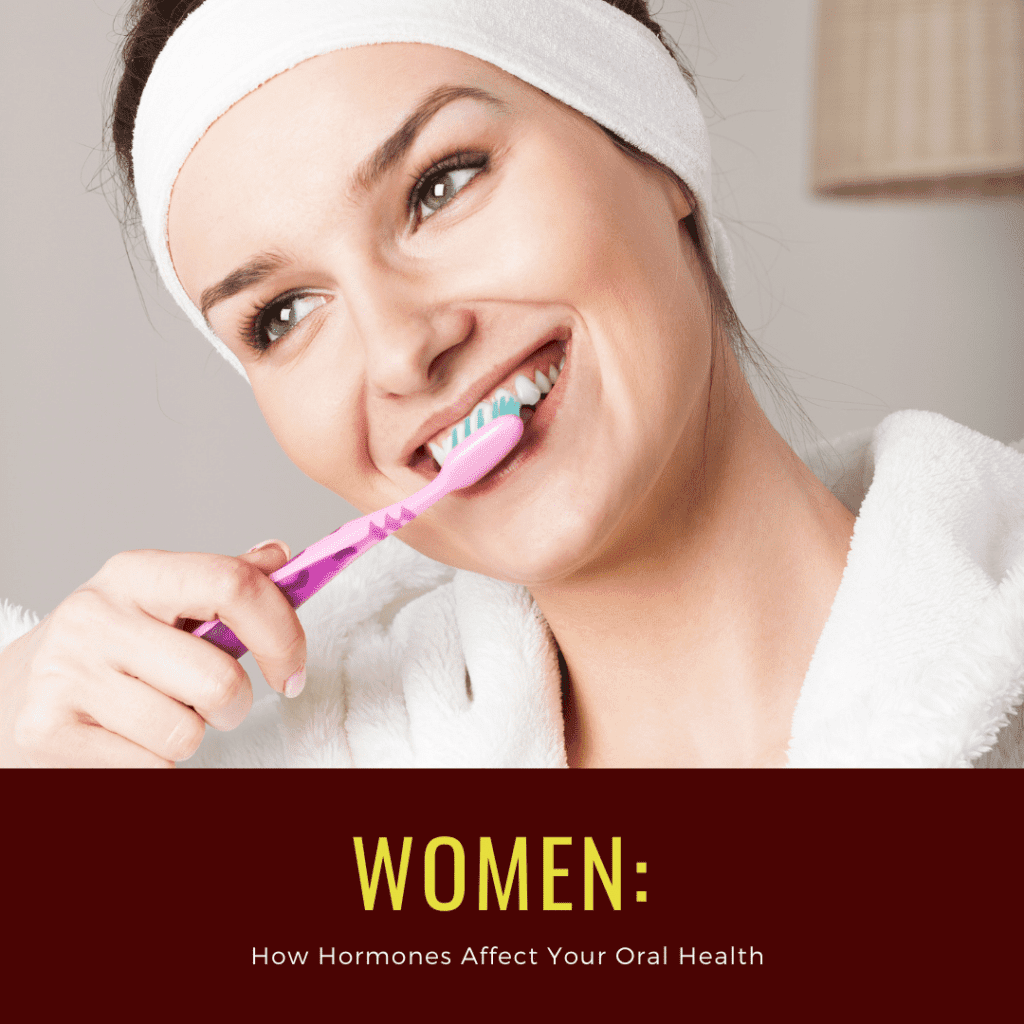 This week (May 9th-15th) is National Women’s Health Week, led by the U.S Department of Health and Human Services’ Office on Women’s Health (OWH). Although this week mainly focuses on conditions that affect your overall health, such as hypertension, diabetes, obesity, and heart disease, it is important to recognize that your oral health is important and can even affect your overall health. Women, in particular, are more prone to certain oral health problems simply because they have different hormones than men.

Hormones are substances produced by the body that act as chemical messengers to make certain things happen. In fact, hormones affect just about everything your body does, as well as different aspects of your oral and overall health. While men and women have the same hormones, these hormones are produced differently, have varying blood concentrations, and interact with parts of the body differently. For example, both men and women produce estrogen. In women, estrogen maintains menstruation through a women’s reproductive life, while in men, estrogen is involved in sperm production.

As mentioned above, the amounts of each hormone differ between the sexes as well. Women have far more estrogen and progesterone than men. Although these hormones are primarily associated with the female reproductive system, they also have a direct effect on the gums. Specifically, high levels of estrogen and progesterone increase blood flow to the gums, which makes the gums hypersensitive to plaque and bacteria. This ultimately causes the gums to “overreact” which leads to swelling, inflammation, and bleeding. Sound familiar? That’s because these are also symptoms associated with gum disease.

Although you can’t change your hormones, you can minimize the effect they have on your oral health. Awareness is the first step. There are five main stages of life where your oral health is at an elevated risk due to your hormones. During these times, it is important to take extra care of your teeth and gums:

The first time a woman’s oral health can be potentially impacted by her hormones is during puberty. During her teenage years, it is not uncommon for women to experience red, swollen, and bleeding gums. In some cases, canker sores may even develop. When this happens, it is important to continue brushing twice a day and flossing daily to remove excess plaque and bacteria from the mouth. Dental cleanings and fluoride treatments may also be recommended to remove plaque and prevent future plaque accumulation.

Although most women don’t notice any changes, some women notice that their gums start to swell and bleed, canker sores develop, and their salivary glands swell in the days leading up to their period. They often last throughout the period and fade once the period has ended. During this time, regular brushing and flossing is recommended. It is also recommended to schedule any dental cleanings a week after your period to avoid increased sensitivity.

While on Birth Control

Nowadays, the amount of estrogen and progesterone found in most methods of birth control are too low to have an effect on your gums. This means that women on birth control are less likely to experience gum disease as a result of their hormones. However, it is still important to tell your dentist if you are on birth control, since it can affect other aspects of your oral health. For example, taking birth control can increase the risk of developing a dry socket after a tooth extraction. Additionally, certain medications prescribed by your dentist may also interfere with your birth control.

The body produces more estrogen during pregnancy alone than it does during a woman’s entire life. Besides estrogen, there are a variety of other hormonal fluctuations associated with pregnancy, which is bound to affect all aspects of your health, including your oral health. In fact, between the second and eighth month of pregnancy, it is extremely common to develop pregnancy gingivitis. Pregnancy gingivitis is characterized by red, swollen, and tender gums. It is important to visit your dentist regularly during pregnancy to manage pregnancy gingivitis since gum disease has been associated with preeclampsia, low birth weight, and premature delivery.

The female body undergoes more hormonal changes during menopause, specifically a large drop in estrogen. This can cause changes in the mouth including decreased saliva production, altered taste, burning sensations, and even bone loss. The two main concerns for your oral health are dry mouth and bone loss. Dry mouth increases the risk of tooth decay and gum disease since saliva is used to regulate bacterial levels. Bone loss can also occur as a result of less estrogen, but can be amplified by severe gum disease. Therefore, it is important to practice good oral hygiene and visit your dentist regularly for exams and cleanings. During this stage, it is also important to get enough calcium and vitamin D.