Gum Disease and the Consequences 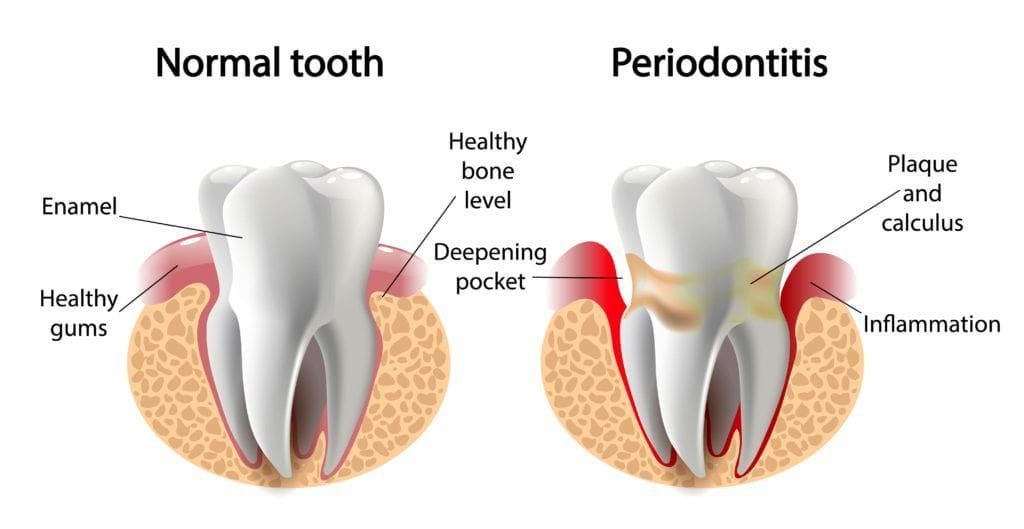 Did you know that over fifty percent of Americans will be diagnosed with some form of gum disease after they turn thirty? Gum disease is highly common in adults, although many adults do not even realize that they are affected since gum disease does not always have obvious symptoms. However, leaving gum disease untreated can have serious dental consequences. Understanding more about what gum disease is, how it develops, and what its symptoms are, can help you to prevent the consequences associated with gum disease.

Gum disease develops as a result of plaque and tartar build up on the teeth. Plaque is made up of bacteria and sits on the surface of teeth. It is basically a film over the teeth that feels fuzzy when touched by the tongue. Although it is soft enough to be removed by a toothbrush, plaque often accumulates along the gum line or in other places a toothbrush misses. The bacteria plaque is composed of causes inflammation in the gums that results in red, swollen gums. If not removed, plaque can then harden into tartar, which cannot be removed with a toothbrush. Tartar will remain on the surface of the teeth, housing bacteria and continuing gum inflammation.

As mentioned before, there can be serious consequences to leaving gum disease untreated. The first consequence is that not treating the disease will allow it to progress further. While the damage done by gingivitis is reversible and can be treated, periodontitis does not have a cure and the damage caused by periodontitis cannot be reversed. This means that the longer periodontitis remains untreated, the more damage is done.

Another possible consequence of periodontitis is gum recession. When the gums have been inflamed for an extended period of time, they will begin to recede. This means that the gum pockets will enlarge as the gums pull themselves away from the teeth. This will expose the roots of teeth, causing sensitivity to hot and cold temperatures. Gum recession can also cause the teeth to loosen.

In the advanced stages, periodontitis can cause bone loss that results in tooth loss. When periodontitis occurs and bone mass around the teeth is lost, this means that the teeth have nothing to anchor them into the mouth. Consequently, they will begin to shift and loosen, and can even fall out or need to be removed as a result of lacking support.

Overall, gum disease is a serious dental issue that can have severe dental consequences. Since most people are not aware they are affected with gum disease, it is recommended to be evaluated by a dentist for correct diagnosis and treatment. Schedule a consultation with The Sadati Center for Aesthetic Dentistry today and we’ll help keep your smile bright and healthy!